Volvo and GF - Building on a sustainable partnership

In recent years, the global rise of electric cars has led to an increasing demand for lightweight solutions. As a pioneer in the field, GF Casting Solutions is supporting Volvo Cars with its broad development know-how to combine multiple parts into one, decreasing the carmaker’s costs as well as reducing its carbon footprint.

As global car sales begin to recover, electric cars are gaining momentum. To capture future opportunities, Volvo Cars is manufacturing its best-selling models, namely SUVs such as the XC60 and the XC90, as fully electric vehicles. The company is scheduled to introduce the new generation of the XC90 as well as the Polestar 3 in the coming years and has also announced that by 2025, fully electric vehicles will account for 50% of its total sales.

“Since Volvo started to localize manufacturing in China, we’ve had a very satisfying partnership with GF.” 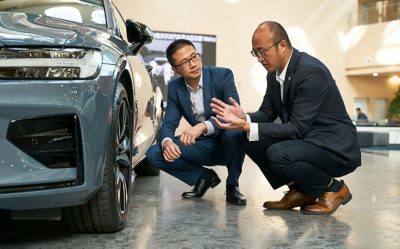 Volvo has become a very important customer for GF Casting Solutions’ Suzhou plant since the car manufacturer started to produce in China for the local market.

Founded in 1927, Volvo Cars is one of the most well-known and respected premium car brands globally. With roots in Scandinavia, the company today manufactures and operates in Europe, Asia, and the Americas and has more than 41’000 employees worldwide. The compact luxury crossover SUV XC60 was the brand’s top-selling model in 2019. Its operating profit in 2019 was SEK 14.3 billion. China is one of Volvo’s largest and fastest-growing markets. In the first ten months of 2020, Volvo sold more than 100’000 cars in the country, about 7% more than during the same period in 2019. China now accounts for about 26% of the company’s new sales. Volvo Cars’ largest plant in China is in the city of Chengdu. The site is 100%-powered by renewable electricity. 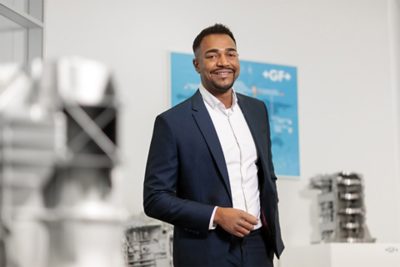 Azim Sood is global Key Account Manager for Volvo Cars at GF Casting Solutions. In his opinion, GF is one of Volvo Cars’ preferred partners because of its experience, stability, and global footprint.

“Since its founding in 1927, Volvo has been known for its innovative strength in safety, with a track record ranging from the invention of the modern three-point safety belt to side airbags. Consumers also favor Volvo for its robustness and durability. Today, with the support of GF Casting Solutions, the company is applying this advantage in the electric light vehicle business. According to Azim Sood, global Key Account Manager for Volvo Cars at GF Casting Solutions, they are doing so by integrating several components and functions into one casting part. The solutions complement the new modular architecture, on which future generations of the XC60, XC90, and Polestar will be based. Research and Development departments at both companies are working very closely together to achieve weight and cost-reduced parts. “Since Volvo started to localize manufacturing in China, we’ve had a very satisfying partnership with GF,” says Aaron Zhou, Senior Supplier Quality Management Engineer at Volvo Cars China. “The new development is progressing well.”

“A few years ago, Volvo Cars started to look for global partners who could work with them in all major markets, which ensures consistency in quality and reduces overhead,” says Sood. The collaboration started in 2015, when GF began to make frontal shock towers for the S90 and V90 models; and later, the project was expanded to the XC60 and S60 models. “Since 2015, the partnership with Volvo has grown steadily,” says Sood. In his opinion, GF is one of Volvo Cars’ preferred partners because of its experience, stability, and global footprint. “Wherever Volvo produces its cars, we have one or more die casting plants in that region.”

Another of GF’s competitive advantages is its ability to meet Volvo Cars’ strict sustainability requirements . As the carmaker aims to be climate neutral by 2040, it has listed progressive goals for its suppliers, including the percentage of renewable energy used by the plant as well as the recycling level of metal scraps, says Sood, adding that GF Casting Solutions will be able to reach the goals by making related investments. “Not every supplier can afford to do that, especially in the middle of a pandemic.” 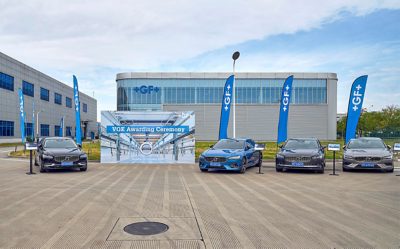 GF received a "Quality Excellence Award" from Volvo on 19 October 2020 in Suzhou (China) for their successful collaboration. 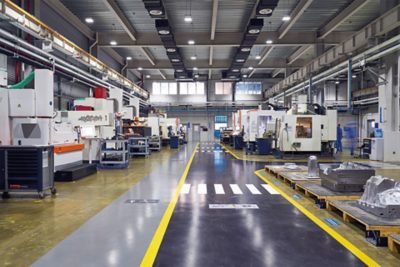 In the "Tooling Technology and Manufacturing Center" of thr GF Suzhou site the die-casting tools are manufactured. 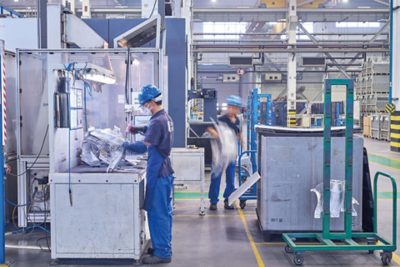 China is one of Volvo's largest and fastest-growing markets. 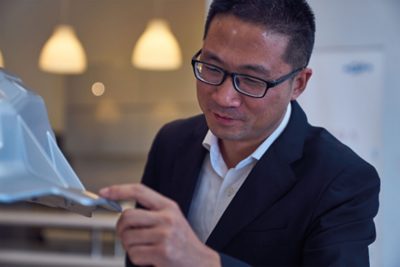 "in terms of our pursuit of quality and sustainability, Volvo Cars and GF have a lot in common, and that's what makes the partnership a joyful ride", says Harry Wang, Head of Sales of light metal at GF in Suzhou.
1/

“I’m very happy with the partnership,” says Aaron Zhou. “GF is a trusted partner; it puts my mind at ease because I can always count on them to deliver quality products on time.” To attest to the successful collaboration GF received a “Quality Excellence Award” from Volvo on 19 October 2020 in Suzhou, recognizing the company’s long-standing support of Volvo’s core values.

Volvo has become a very important customer for GF Casting Solutions’ Suzhou plant since the car manufacturer started to produce the XC60 and S60 in China for the local market, and with the new mold shop in China, time to market has been significantly shortened, says Harry Wang, Head of Sales of light metal at the facility. “In terms of our pursuit of quality and sustainability, the two companies have a lot in common, and that’s what makes the partnership a joyful ride.”

More on the horizon

According to Azim Sood, as GF and Volvo work on the functional integration of several parts, the two companies are also exploring opportunities to collaborate on more projects, including a new design for several structural parts. He adds that he’s very confident that Volvo’s sales will continue to grow as they have done over the past few years. For example, in China, the world’s largest auto market, Volvo has steadily gained traction. In 2019, sales grew 18.2% annually, according to the company. By October 2020, China was the best performing market for Volvo in terms of growth rate (5.2%), accounting for more than 25% of the company’s total sales globally. “As our new plant in Shenyang is expected to be ready by 2023, GF will be able to better support Volvo’s future ambitions in China,” says Harry Wang. He also explains that compared to Suzhou, Shenyang is closer to Volvo’s factory in the city of Daqing, which will translate into fewer logistics costs for the carmaker. “I’m excited and looking forward to building on our trusted partnership.”

“I never worry about meeting our targets on time.”

Aaron Zhou is Senior Supplier Quality Management Engineer at Volvo Cars China. Zhou joined Volvo Cars five years ago. He oversees the quality of products from R&D to final delivery. Zhou spends the majority of his time traveling and visiting suppliers across China. 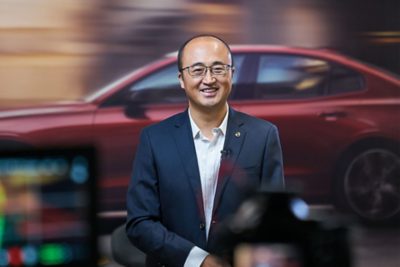 Why is the new rear side member important to Volvo’s new models?

The new integrated part is a much lighter and cost-efficient solution for our new modular platform, on which future generations of the XC60, XC90, and Polestar will be based. But since it’s a collision part, it also has to be strong enough to meet our high safety standards. During manufacturing, the part, which is thin-walled and big, is prone to distortion in the thermal treatment process, and thus very difficult to produce. GF is still in the part development phase, but the results so far are very promising.

Which qualities of GF Casting Solutions do you value most?

I think both companies are very focused on quality and sustainability, so, figuratively we speak the same language given the shared values. GF has a very long history of excellence, and their team is very reliable and responsive throughout the R&D process. With GF I never worry about meeting our targets on time.

Were there challenges or memorable events? The new project started amid a pandemic, after all.

Of course, the pandemic caused a little delay. But GF made the investment on new manufacturing equipment as planned, and we are able to proceed successfully. For me, that’s actually what I desire from an excellent supplier – that everything goes smoothly forward as scheduled. 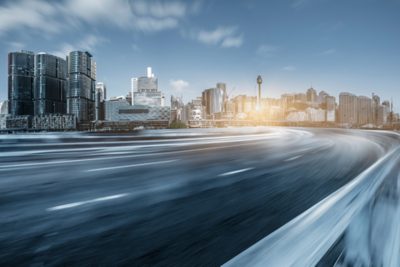 Our solutions for alternative drive systems

Electric, hybrid, hydrogen and #zeroemissions: What are the consequences of current trends in the automotive industry for our light metal and iron casting foundries? How will this change affect our product portfolio? Find out how we at GF Casting Solutions are helping to shape the change of mobility!

The reduction of CO2-emission is the key challenge of the global automotive industry. Alternative drives or the reduction of fuel consumption and emissions in a combustion engine: our lightweight solutions help our customers to reduce weight and to integrate more functions, like cooling systems. We combine our development know-how with 200 years of production excellence in the automotive industry. 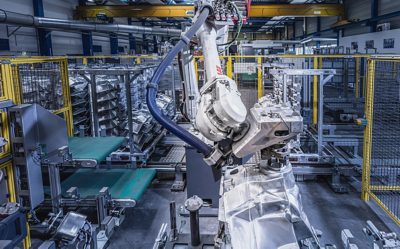 With multiple aluminum and magnesium alloys we set the highest standards for high-pressure die-casting components. Over 100 die-casting cells worldwide and closing forces from 200-4.400t. We offer the entire value chain from the raw casting to the ready-to-mount component.

Find out more about financial figures, information on GF's strategy, and business segments in the online Annual Report.